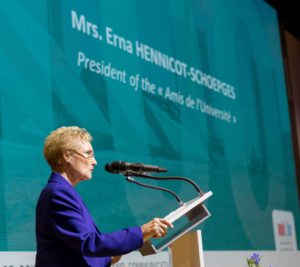 The year 2016 marks a centenary: 100 years of engineering education in Luxembourg!

Luxembourg’s first « Cours technique du supérieur » was held in September 1916, and marks the launch of higher education in this country.

The University of Luxembourg celebrated this significant anniversary, with a lecture series commencing 20 September 2016 on the Kirchberg campus, and culminating in a night of festivities on 7 October 2016 on the Belval campus.

Their Royal Highnesses the Grand Duke and the Hereditary Grand Duke, honored the Closing Ceremony celebrations by their presence and by visiting the companies participating in the celebrations organised by the University.
The Minister Delegate for Higher Education and Research, Mr Marc Hansen and the former Minister of Culture, Higher Education and Research, Mrs Erna Hennicot-Schoepges, Patron for this event, spoke to the audience during the closing ceremony.